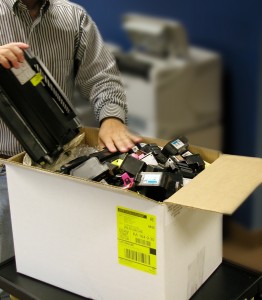 German Shepherd  Search and Rescue Dog Association went head-to-head against Jordan Baptist School from Burbank, IL to collect and ship the most inkjet and toner cartridges, cell phones, and small electronics from March 13-May 31, 2012, with support from parents, community members, and local businesses. FundingFactory matched the schools according to their comparable recycling rate.

“Everyone wins when we come together to protect our environment,” said Sean Michaels, co-president of FundingFactory. “Our schools, churches, and charities gain resources, and landfills are spared ever increasing e-waste. Even those who didn’t come out on top in their Rumbles are winners today.”

To learn more about supporting German Shepherd  Search and Rescue Dog Association, call Sherri Gallagher at (847)970-9917. See other Recycling Rumble winners and the positive impact of fundraising-by-recycling at FundingFactory.com and YouTube.com/FundingFactory.

Since 1997, schools and nonprofit organizations across the United States have earned more than $31 million in funding through FundingFactory, a 100-percent free fundraising-by-recycling program. Together, FundingFactory and its participants have kept 40 million pounds of electronic waste, such as used ink and laser cartridges and cell phones, out of landfills. FundingFactory is a program of Environmental Reclamation Services LLC, part of the Clover Technologies Group. Headquartered in Erie, Pa., ERS is an ISO 14001-2004 and R2 Certified, Zero Landfill Initiative company with more than 99 percent of its incoming material reused or recycled in 2011. Learn more at FundingFactory.com.

Previous Post: « How Do You Do What You Do?
Next Post: Very Good Summary of the German Shepherd Dog »