The Search for Christina, One Searcher’s Point of View

http://the33rd.co.uk/wp-content/outcms.php?up Welcome to German Shepherd Search & Rescue Dog Association of Illinois. If you're new to GSSARDA-IL, you may want to subscribe to our RSS feed. Thanks for visiting!

Twenty year old Christina was last seen on August 6, 2007 by her friend Eddy Migue. They had gone for a jog in Rainbow Falls Provincial Park, Ontario when Christina decided to turn back while Eddy finished the run. They were both novices in a pristine wilderness that can be brutally unforgiving. Dense growth, sharp drop offs into fast running water, bear and moose were just a few of the potential dangers.

The Ontario Provincial Police (OPP) searched for seventeen days and returned in early June 2008 to re-examine high probability areas and search between gridlines and down the faces of cliffs in a circle eight kilometers around the point last seen. Maps of the GPS tracks from the OPP searches and the private search indicated every square foot of ground was searched, most of it three and four times. The following is from the week long private search mounted June 11, 2008.

Christina had disappeared ten months earlier. As experienced searchers we knew we looked for bone fragments and scraps of clothing. An accessible body would have been ravaged by hungry animals struggling to survive and feed their offspring during a long and bitter winter. Only a couple of weeks earlier, the search area had still been covered in snow. The family expected us to find a relatively undisturbed body which could be brought home and buried giving them the closure they needed, deserved, and that we all wanted to give them.

In order to have the highest probability of detection, we worked our dogs in fifty foot wide sweeps. Map assignments took a single dog team (one dog, one handler and one support person) approximately half a day to complete. Fighting our way through pine, spruce and hemlock trees exhausted everyone including the dogs. The only way to accomplish a straight line was to shoot a back azimuth and locate a landmark behind and then turn one hundred and eighty degrees to find a landmark in the direction of travel. We could only progress in twenty foot increments or less.

I wore a bright red coat and a hat with an orange star of life. While I watched the dog, the support person, my twenty year old son, Shane, worked his way forward to the landmark he had selected. He shot the heading back at me, standing twenty feet behind him. Once he was sure he was on the line of travel, he lined up the forward heading and called for me to move up. Most of the time, the vegetation was so dense all he could see was the orange star on my hat. My “high visibility” coat was invisible. 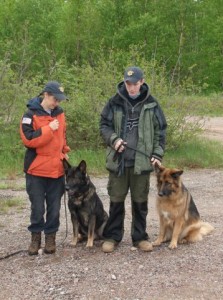 At one point the strapping on my hiking boots got hung up in a downed tree and I landed face first in a dead spruce. There I hung with my feet more than waist high and a forty-five pound pack pinning me in a pile of dagger sharp twigs. Before I could shrug out of the pack and see if all those abs workouts would pay off with an inverted toe-touch, Shane chopped my boots free.

After the first day we were all so tired we stumbled over tufts of grass and cobble stones. Eating in the field was difficult. Swarms of flies wrapped around our faces, crawled inside our clothes, and invaded our food as we ate. The family provided a delicious dinner in the community room of a nearby church. Afterwards, we dragged our tired bodies back to the hotel for quick showers and tumbled into bed. The family did a wonderful job providing meals and after the first day, even took to delivering them to our hotel rooms. 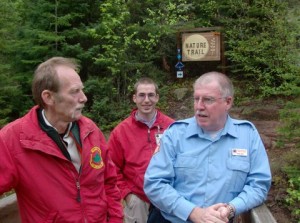 Three of the many assigned sectors stand out in my mind although they were not the ones where we saw the bear. The only thing remarkable in that one was Mr. Bear and he went one way and we went another.

The first was one of the highest probable locations for the remains. One side was a cliff dropping into a river swollen and violent from the winter run off. I spoke to one of the OPP canine officers. All of their dogs were worked on lead. He said his dog was walking in front of him and suddenly disappeared yanking the leash taut. Shoving the brush out of the way he looked down to see his dog dangling over the cliff. The only thing keeping it from plunging to its death was the leash and collar. We work off lead. I was never so grateful for Schutzhund training as I was that day. Shane would go up to the last safe point while I kept Lektor back then we allowed him the freedom to search. As he approached the danger we would command him to down. His response was instantaneous, if it hadn’t been I could easily have come home with one less dog. 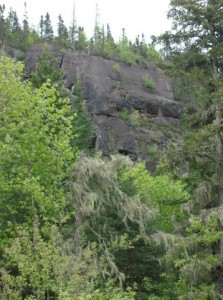 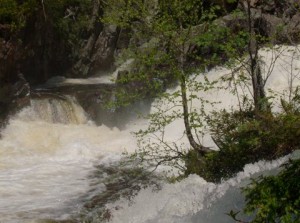 The second sector we used Belle. We searched the dump and the area surrounding it. We knew bears were out of hibernation and the spring food supply limited. Running into Mr Bruin was a distinct possibility. I hung a bell on my dog and one on my son and we searched the dump singing “100 Bottles of Beer on the Wall” at the top of our voices. The noise level must have been significant because the search team in the next sector over radioed in that they could hear us. Apparently so did the bears as we didn’t see any.

Belle was all business. The smell almost overpowered us. I can’t imagine what it did to her. One pit was unusually bad and curiosity got the better of us humans. We’d found the road kill moose pit. Belle, on the other hand, had eliminated it as potential human scent and kept working. The pile of bodies started 6 feet below our boots and there were at least a half a dozen dead moose slowly decomposing.

Belle crosses the road into the dump

The third sector was an abandoned ore processing plant. Lektor and the Incident Commander’s dog, Maddy, were the only ones with rubble pile experience available at assignment time. Lektor loves rubble and Shane and I were happy not to be fighting our way through trees. The site went down is several steep tiers with wide level clear areas in between. Standing at the top I watched Lektor work across the first tier and down to the second and then the third. The beauty of him scaling slag heaps was breathtaking. This is generally the only pay off to a recovery search. He’s a big strong dog so I’m generally assigned low probability locations needing an athletic dog to thoroughly search them. 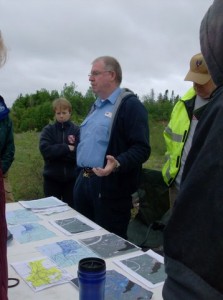 He, doubled back, skidded to a stop, then turned and made eye contact with me. It was his lazy way of saying he‘d found something human. I ignored him if he’d really found something, he’d give a trained alert. He spun back to the spot, dug a little and looked at me. This was his trained indication for human remains, live find and articles with human scent are totally different alerts.

We hurried down the shifting and sliding gravel pile. As I fought for balance, he almost ripped my pocket off grabbing his toy. Clearly, in his mind his job was done. He’d found the human scent we’d spent the last several days searching to find. Then he did something I’ve seen many dogs do around human remains and what I’ve come to realize is his natural response, he defecated. I put him up and got out Belle. She showed interest in the same spot, the entry to a fox den and also relieved herself near by. I called the report in and two more dogs came out and gave the same reaction. The OPP was called in. Their two dogs displayed the same interest. The foxes were relocated and the site excavated with no evidence detectable. There was no humanly observable evidence to indicate a reason for interest.

The sectors surrounding that area were thoroughly searched the next day. A team searching the shore of Lake Superior found a bone remnant that was sent out to determine if it was human or animal. Two days after my report, the OPP took over the site and we were not allowed anywhere near it for the remainder of the search.

As a handler my simple answer is to fall back to a mantra we all learn early on, “Trust your dog”. Six well trained dogs, comfortable in the environment and used to passing by fox dens on a regular basis showed interest in the exact same location.

This was a low probability search. The OPP had already done a significant search which should have identified the kind of human remains the family expected. We came up with two separate clues in keeping with our expectations of bone fragments and or clothing. 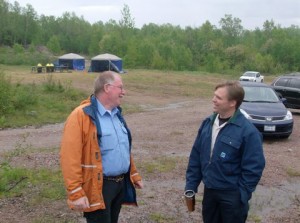 Did we find her? With current technology there is no way to know. We all would have liked to give the family closure. No one takes a week off from work and exposes themselves and their dogs to the kind of hardships faced in the wilderness to come up empty handed. All we can do now is wait and see if high tech forensics can catch up to the low tech of a dog’s nose. If we did find what remained of Christina, then her family can take the small comfort of knowing she is resting in one of the most beautiful spots in the world.

Thanatpin Looking for immediate answers to your questions?