House Breaking a Puppy Before It Breaks Your House

House breaking a Puppy Starts with Teaching  It to be Clean 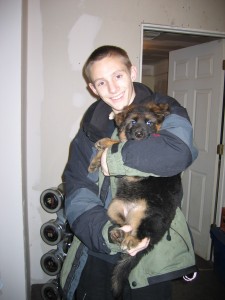 Prevention – the Key to House Breaking a Puppy

If you can prevent accidents in the house you’ve made a huge step toward house breaking your puppy. Dogs relieve themselves in places they have gone before. They find these places by using their nose. When your puppy relieves itself in your house, there will be a residue of scent for a very long time after you clean it up. Just because you can’t smell it doesn’t mean the dog can’t; a dog could detect a teaspoon of sweat in an area the size of Philadelphia, finding the microscopic residue of their own pee isn’t that hard. so preventing accidents in the house is key to house breaking a puppy.

Start by going outside regularly, with the puppy. If your puppy had newspaper in its former home, put some down outside where you want the dog to relieve itself. Stand quietly with the puppy on a loose leash and let it sniff. Keep it in the area. If possible minimize the play until the puppy has relieved itself. Once it relieves itself give praise and immediately start to play. I like to associate a word with the act so when I’m traveling I can warn my dogs to “go now”. Giving a dog a place to relieve itself will help in house breaking a puppy.

Getting Things Moving When Housebreaking a Puppy

If your puppy has been sedentary for the past few hours, it may not be ready to relieve itself the instant you go out the door. Take a ball or play tag with your puppy for a few minutes. Don’t do this in your prize roses, as running will get the puppy’s digestive track moving and it may be running one step and peeing the next.

Too excited play may make the puppy hold its urine. You are so much more fun to be with, it forgets to pee. If the puppy had access to water, it has been a couple of hours since it last relieved itself and you’ve been playing rough and tumble, run like a maniac, and still it hasn’t gone pee, congratulations you have great handler potential. However, in this particular instance , it is time to slow things down. Wander to the place the puppy has pee’d before and give it time to sniff. Praise it and associate the word and play some more. If you play a lot make sure you give the pup the opportunity to poop also. Otherwise you will still have issues in house breaking a puppy.

The Crate Is your Friend When House Breaking a Puppy

If your puppy doesn’t relieve itself outside bring it in and put it in the crate. Most puppies like to be clean and will start making a ruckus before soiling the crate. Of course the crate must be sized correctly so the dog doesn’t have room to make a corner its’ bathroom.

A friend asked me to help as her puppy had been almost housebroken at the breeder’s and now was having regular accidents in the house. My friend is a gentle soul and didn’t like the idea of crating the puppy for more that an few hours and at night. the problem was she hadn’t figured out the subtle signs her puppy had to go so it used the house for its’ bathroom. It decided not to go outside as there was so much to see and sniff. If you can’t be focused and interacting with your puppy, put it in the crate. Allowing too much freedom will create issues in house breaking a puppy.

Some puppies are slobs and happily soil the crate. It can be because we, the owner, have overestimated the time they can hold it. It can be a rebellion thing to aggravate the pack leader, but generally this occurs in puppies that are a little older. Or it can be a fact that they are quite happy smelling awful. Have patience you will be able to house break this puppy.

Don’t show your anger or frustration. Take the puppy outside to see if it still has to go more but don’t give it play unless it uses the great outdoors to finish going to the bathroom. Bring it inside, clean and scrub the crate, shampoo the pup and put it back in the crate. If you waited 4 hours between trips outside, shorten it to 2-3 hours. You want to get the timing right so the puppy comfortably goes outside. This will help in house breaking a puppy.

I had one puppy that had been paper trained. It viewed the blanket I put into the crate as newspaper and soiled it. I removed the blanket and no more accidents. Another was not used to being clean. It took five days of shampooing him every morning before he got the idea. It was long enough for him to earn the nickname “drip dry”. One older puppy liked the attention of her owner coming to clean her and the crate when she had an accident. I puppy sat and she pulled it on me the first day. I had a meeting with no time to shampoo or address the situation and left her sit in it for a couple of hours. I put her in a run while I cleaned up and then shampooed her, making no comment good or bad. No more accidents from that day on. (I am NOT advocating leaving a puppy in filth on a continual basis, this was clearly a puppy in control and trying to control the handler.) You are the one in control when it comes to house breaking a puppy.

Timing is Everything When Housebreaking a Puppy

Just like any other training the timing of bathroom visits is critical. Expect your puppy to have to relieve itself immediately after eating. This is not a time to play, you walk it sedately to its bathroom spot and hang out.

The time between walks is also important. I start out taking the puppy outside every 2 hours. I do extend it to every 4 hours at night. I gradually increase the time between walks as the puppy grows and develops. Generally, at 6 months I can take a last walk at around 10:30 PM and the puppy will not need to go out until 6:30 AM. This will vary from puppy to puppy. If you little guy is 6 months and raising a ruckus after 4 hours and rushes to relieve itself as soon as the crate door opens, set the alarm, your baby isn’t ready to sleep through the night. Part of house breaking a puppy is giving it the time to grow and develop control and that is different for each individual puppy.

Watering  and Feeding When House Breaking a Puppy

We all need water and you must make sure your puppy gets enough not to develop kidney, and other urinary problems and to maintain general good health. It is reasonable to remove the water from the crate when you go to bed. Most puppies I know gulp down all the available water. Given the opportunity, I think they’d attempt to guzzle the whole of Lake Michigan. Part of growing up is developing the confidence in the availability of water and the ability to pace themselves. In the meantime it is acceptable to give frequent smaller amounts. Remember what goes in must come out so keeping a puppy from filling its’ bladder to bursting just makes sense when house breaking a puppy.

Schedules and House Breaking a Puppy

Keeping your puppy on a schedule will do wonders at preventing accidents. The schedule should fit your routine. A handler who is a late rising night owl will feed on a different schedule then the early to bed dawn raider. Dogs pick up on their humans’ habits and develop a similar schedule. For example, when I got Lektor he apparently had been trained in the afternoon or evening. Nine AM had him stumbling around like he had a hangover and I started training at 6 AM. By day 2 the tennis ball was doing a soggy splat in my face at 5:57AM and he was bouncing like a ping pong ball looking for his morning play.

Try to feed about 12 hours apart and whatever time you pick, work at keeping it consistently. You’ll quickly develop a feel for the timing of your dog’s digestive track. When in doubt, write down the time you fed and the time the dog emptied his colon. A week should give you a pretty good idea what is the right schedule for house breaking a puppy.

Look for subtle signs when House Breaking a Puppy

Watch your dog until he relieves himself. Notice how his head and tail carriage change when he is looking for the right spot. Now when you have your puppy loose watch for those signs. If you think you see them take the puppy outside.

It will depend on your puppy when he is ready to be trusted on his own. The interval should be short, as in under 10 minutes and right after he has relieved himself. If he is good, gradually increase the time until you can trust it to wait all day for you to take it for a walk. House breaking a puppy takes patience but is well worth the effort. Patience and persistence will be key when house breaking a puppy.