The begleitenhund or BH is first and foremost a temperament test. Good nerve strength, even temperament dogs don’t bite unless told to do so. The easiest way to sort out the dogs that don’t have the temperament for search and rescue is to require the BH. The BH is open to all breeds of dogs and mixed breeds, provided the dog has an identifying ear tattoo or is micro chipped for positive identification. 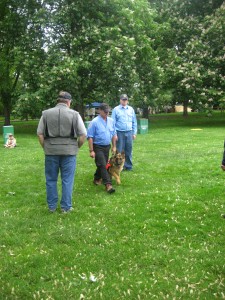 The begleitenhund or BH is first and foremost a temperament test. Good nerve strength, even temperament dogs don’t bite unless told to do so. The easiest way to sort out the dogs that don’t have the temperament for search and rescue is to require the BH. The BH is open to all breeds of dogs and mixed breeds, provided the dog has an identifying ear tattoo or is micro chipped for positive identification.

The test is similar to the Canine Good Citizen (CGC) but requires several additional elements and is stringently judged. Both tests require the dogs to be polite at heel and accept a friendly stranger while on leash. On the CGC this is a separate element with the person petting the dog. On the BH, at check in, two handlers approach the judge with the dogs on lead and shake hands with the judge. Both dogs, which are sitting only a few feet apart and must ignore each other, while the judge checks their ear tattoos or microchips. The CGC requires the dog to sit quietly while the judge brushes the dog and examines its ears and paws, similar to what would happen in a veterinarian’s office. The paws are not touched on the BH.

The CGC requires two dogs on leash to show only casual interest when walked by each other.

The BH requires the dog to do an off lead down stay with the handler at a distance with his or her back to the dog. I have seldom seen a dog pass the BH routine if it breaks this long down. The length of time does vary. The dog must stay in the down position while a second dog performs the on and off lead heeling. This generally takes about 10 minutes. As a handler it feels more like an hour and you want to scream at the other handler to “hurry up”. The BH obedience routine ends with a recall. The dog on the long down, must stay in place while the performing dog races to its handler. Both tests require the dog to recall quickly and immediately. In the BH it must sit in front of the handler and then on command return to the sit at heel before the handler can touch or reward the dog.

The BH requires  both an on and off lead performance of heeling at various speeds, turns both right and left and heeling through a group of people. The CGC has similar requirements for on-lead heeling but does not have an off lead portion.

As part of the BH the dog must do a sit and then a down on a motion (give the command and keep on walking without looking back, the dog obeys within two steps and waits for your next command.) In the CGC the handler has a choice of sitting or downing the dog, waiting until it has obeyed then walking a distance away and returning.

In the CGC the dog will given to a stranger while the handler goes out of sight and returns 3 minutes later. The dog must behave. If the dog passes the BH on and off lead obedience the second portion of the test is performed. The dog is tied out and the handler leaves its sight. A stranger walks up and pets the dog and then makes a loud startling noise. The dog must remain friendly and non-aggressive. A second neutral dog is walked within the range of the tied dog. In some cases the judge will have the neutral dog sit and then continue on. The tied dog cannot act aggressively or show more than casual interest in the neutral dog.

In both tests the dog is walked on lead while a jogger runs by. In the CGC the dog must not panic. The BH adds a cyclist and a car driving by tooting its horn and people leaning out the windows yelling and laughing. In the BH the dog must not break the heel position.

We have found the BH to be an excellent test for identifying dogs with the temperament to do search and rescue. This also eliminates the need to perform obedience training and testing during the precious few hours the team has to train as a group.